It’s an open secret. Software-as-a-service (SaaS) partnerships are hard. In fact, they are are a lot harder than most expected. The fundamental business model of SaaS–subscriptions–makes it hard.

By requiring an ongoing direct relationship between customer and software marker, software companies are forced into direct sales and direct marketing. This leaves little room for partnerships.

Why the PC revolution grew faster than SaaS 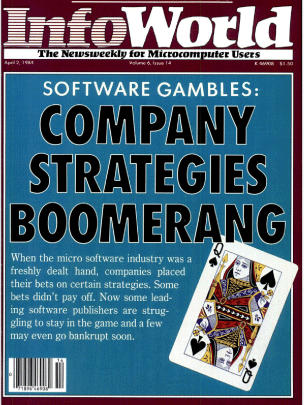 1984 was the peak of the PC software revolution. Of course, when you’re in the middle of it, you don’t know what’s going to happen. 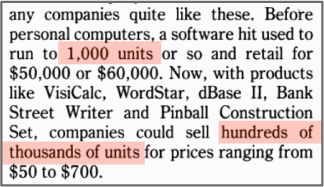 The 1970s was just like Enterprise SaaS today; the real channel came with the PC revolution.

The PC revolution was a big change to how software was made and sold. Before the eighties, software companies used to sell big enterprise licenses. They’d be happy to sell 1000 units, perhaps win some kind of recurring service agreement associated with the software.

If that sounds like enterprise SaaS today, that’s because we’re all doing the 1970s again!

What happened in the eighties was simply that someone figured out you can put software in a box and ship it all the way to retail. Some companies sold hundreds of thousands of units.

In fact, the fastest growing software company of the time was Lotus, which sold $53 million in the first year, which in today’s money is about $125 million.

That was the power of the channel in the PC revolution–but, of course, when you’re in it you don’t know. Even though Lotus did well, most software companies were losing money.

And yet InfoWorld doubted the PC revolution… 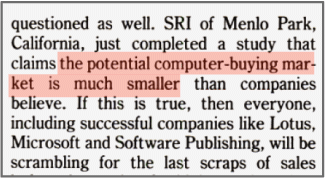 No one is going to buy personal computers!

So… Was the personal computer just a fad that was fading?

And Microsoft–you know they’re crazy! They should stick to their knitting and stay in operating systems. Never, ever should they build applications. And today we’re so glad that they’re still building MS-DOS.

Partnerships made the PC revolution

The top software companies in 1983

What I love about this story is it really shows the partnership role in software.

If you look back in 1983 when this article was published, Microsoft was not even the biggest software company around. It was MicroPro International.

If you don’t remember, they made WordStar, the dominant word processing software of the early PR revolution. At their peak, WordStar sold 700,000 units in one year.

Everyone knows the Microsoft partner story

Microsoft did a deal with IBM to build the operating system MS-DOS for the PC.

Well, WordStar did as well. Indeed, WordStar had an amazing channel marketing strategy. They did bundling deals with early personal computers such as Osborne computers. Whenever a computer was sold, WordStar was sold.

And Lotus was actually a team from inside VisiCorp which made VisiCalc, the number one spreadsheet. While VisiCorp was distracted with their success, hosting conferences and publishing books, they let Lotus go off on their own. Lotus turned around to do their own deal with IBM to become the “killer app” for the IBM PC.

Lotus made a classic partnership mistake

Software partnerships made and broke companies in the PC era (source).

And yet, despite Lotus’s enormous size, everyone knows that Lotus is not the spreadsheet we use today. It’s mostly Microsoft Excel. Even though Microsoft warned Lotus for years to that Windows was going to be the new platform, Lotus declined.

Lotus overcommitted to their favorite channel by agreeing to only build Lotus for IBM OS/2, which killed them.

If you ever want to know why the value of partnership people in software, it’s because these decisions are the ones that make or break software companies. Opportunities seized, platforms chosen, options negotiated have a huge impact on a company’s success.

This is what partnership leaders dream of: closing the deal that will become their company’s breakout success. And also their nightmare: missing the opportunity that leads to zeroing out the future.

That’s what the members of the Cloud Software Association believe in. We’re the SaaS partnership network. We all want to close the $100 million partnership.

So, why aren’t partnerships the most important team in SaaS? 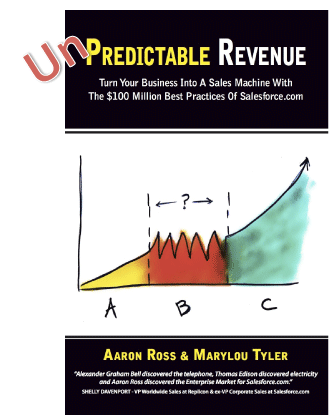 So while this may lead you to believe that partnerships should be the most important team at any cloud software company, we all know that the teams that grow the fastest are sales and customer success.

Partnerships are UNpredictable revenue. We don’t have a process that guarantees results because we’re working with these big wild bets. 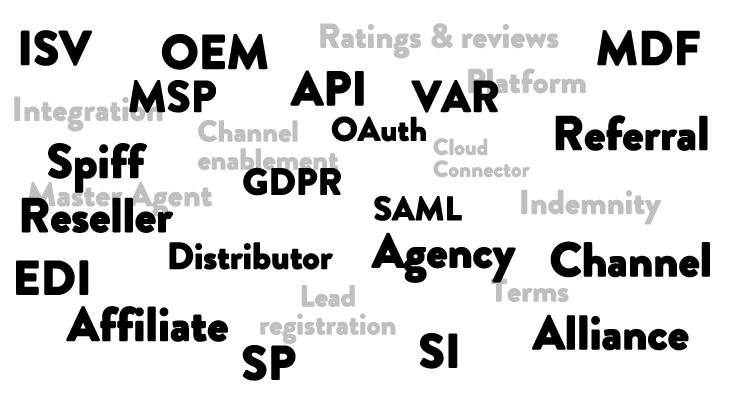 What’s inside a software partnership manager’s head every day

Moreover, a typical partnership person has to keep so many different partner channels open in their mind in a given week. From Monday at 9:00 a.m. to Friday at 5:00 p.m., those of us in partnerships and business development work on 3 or 4 completely different programs from resellers, to integrations, to distribution, to comarketing.

Sure, this is why we partnership leaders love the work. And we love landing a deal.

Breaking through the growth ceiling of SaaS

Finally, this year, a few companies may break a million companies paying for their SaaS, in some cases by converting their desktop customers to SaaS. After years of partnership people, channel people, reseller people coming to SaaS Connect trying to figure out how to get the distribution network to work, we’re now on the precipice like they were in 1984.

Here’s what you can do next:

Read the next part in the series: A framework to understand all software partnerships

← The SaaS Capital (or Funding) Continuum: 10 Forms From Inception to Exit
A framework to understand all software partnerships →

Over 3,000 companies have joined the Cloud Software Association.